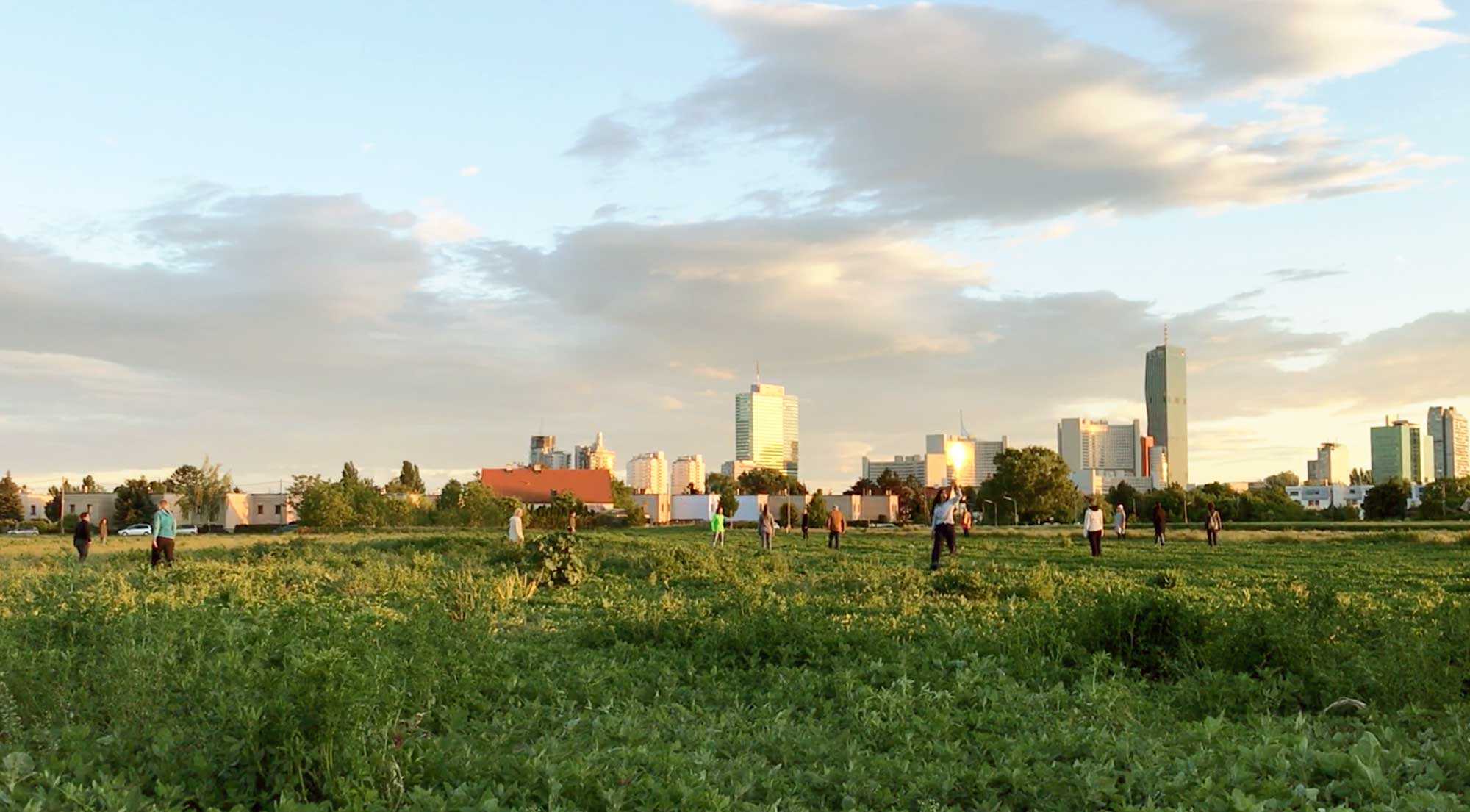 "Every sound we make is a bit of autobiography. It has a totally private interior yet its trajectory is public. A piece of inside projected to the outside." — Anne Carson

A voice is as singular as a fingerprint. When we scream, we catapult ourselves inside out, revealing that dimension of ourselves in between body and mind, maybe closest to our soul. »To open our mouth and let out sounds from a hole in the middle of our face« as Jonathan Ree describes it - disclosing both our strongest power and deepest vulnerability.

Physically, the scream is an instance when an inner force or energy is released in an unforeseen, unplanned way, the voice transforming the body and the body transforming the voice. The screamer breathes, screams, releases, transforms, channels and dissipates. Since 2013, my ongoing investigation of the act of screaming in its aesthetic and political potential has led to several expressions, formats and frames in which I create the possibility for people to scream. With the understanding that every person screams from a different place, I developed different techniques and methodologies to include every one with a desire to scream, also those who have never screamed be- fore. In a patriarchal society in which dominant virtues are to be rational, self-contained or controlled, I see screaming as an act of resilience, a basic right and democratic tool.

For its opening in May 2019, Wiener Festwochen invited me to create a scream-scape with local inhabitants of Donaustadt. A group of 18 people participated in an intense 4 day workshop, in collaboration with the artist Britt Hatzius and voice-coach Christian Reiner. Realising that each participant has their own individual motivation to scream and their distinctive way of doing so, this scream-scape invites the audience to momentarily sink beneath the surface of composure and witness the collectively liberated energies in this momentary composition of screams. undercurrents unfolds at the edge of the city, in a field, on one of the last wastelands left in this area, an open space that allows for the scream to be released, resonate and vanish again.

Read a conversation on undercurrents between Sarah Vanhee and Britt Hatzius

Sarah Vanhee When we started our collaboration on undercurrents last year, you—having never screamed before and not being a performer by training—said that screaming makes you “squeamish”. You also asked me not to assume that everyone is bold enough to just do it. And I—having had some experience with screaming and being a performer by training—kept saying: »but there are techniques to scream, it’s not so hard if you get the tools, it’s fun and liberating.« I think our different starting points made us very aware of the care needed when working with a diverse group of potential screamers, of the importance of respecting every individuals‘ own limits, and ultimately to do just this: to offer tools and a supportive environment for everyone to find their own place to scream from.

Britt Hatzius I found the idea of screaming as a practice fascinating. To think of tools and techniques instead of emotions felt liberating against the “baggage” of associations I had brought to the conversation—stereotypes such as the hysteric female character or terrified horror movie scream. Throughout the workshops in Vienna it became clear how simple technical vocal training or playful mimicry could help build trust in ones‘ own voice, and as a group unleash a most diverse range of sounds that defied any stereotypical scream.

S. V. I never had any intention to create something anecdotal, dramatic or therapeutic—even if screaming can have a therapeutic effect. Our approach was rather matter of fact: we are here together to scream, and here are some tools and ways one can do that. And we did a lot, the group did a lot because they were so extremely kind and encouraging to each other. It takes trust to be able to scream together.

B. H. It was as if we needed each other in order to allow ourselves to go beyond the more familiar, measured and restrained utterances of everyday life. The difficulty for me was how to imagine transforming these screams into a performance or a choreography—how do you notate a group of screamers screaming? It seemed impossible to on one hand want to scream the fullest/most real/most meant/most powerful, truest scream, while consciously deciding where or when.

S. V. Yes, at some point we had “scripted” it too much. Even if I had always thought of the intervention as being a choreography or a score, any too formal directions inhibited the screaming. The participants did need some form of guidance or framing in order to feel safe. But at some point it felt too set, and so we asked the participants to forget the score again. Yet they had already internalised it, and so it remained, hidden, somehow already embodied. For screaming, time-space dimensions function differently than for music and dance.

B. H. This is where our conversations also turned back to the idea of screaming as a practice. The screamers were not performing a single act, but were by now sharing a practice. Anyone looking at, or listening to, this group screaming in the field would be considered witnesses, rather than an audience in a theatrical sense.

S. V. I also think it was important that the participants invited the audience to share the physical ground with them, in the field: starting from the same soil. Each screamer had their own ground to scream from, we never asked why but we could feel that there was an urge, a necessity.

B. H. A necessity that one could sense and hear, whether it was their first or last scream.

S. V. After every workshop session I felt both exhausted and energized, happy and sad, tired and relaxed. When “receiving” the screams of our participants I could not not be touched. I don’t mean “being touched” in the way a movie or a song touches you, I almost mean it literally: it’s as if the scream hits you, throws its full emotion at you, unformed, unfiltered. Christian, our voice-coach, and I would describe our feeling after each workshop as having no skin left. One participant asked me: »Do you recognise emotions when you look at us screaming?« and I honestly had to say no: I could not say if someone screamed from anger or sadness, excitement or frustration. And that’s maybe where true emotion lies, somehow entangled with movement, of bringing sound/sense waves into motion, from deep down, the undercurrents. Of course it has something to do with our psyche but not with the conscious part of it. A friend of ours once told us that screaming made her feel connected to ancestral energies, and I understand that. For if I scream myself, I rather feel like I’m channelling something, than expressing something.

B. H. That‘s a beautiful thought, and I can relate to it, in a physical sense too, of connecting to other bodies, non- human bodies—when the birds and dogs responded for example, most naturally barking or croacking back at our screams. Or the very visceral response to echos bouncing back off trees, the ground, the walls and buildings at a distance. The way the sound of a scream is itself produced by a vigorously resonating human body which in turn sets other (non-human) bodies in motion. It makes me think of my blind friend Thomas who actively produces a sound with a tongue click in order to then “read” the echos that return to him. »I speak to the world with a click, and the world speaks back to me with an echo«, he once said to me, suggesting a very tangible dialogue with the material world through sound.

S. V. It felt to me as if only an open space and outside elements are vast enough to “hold” the screams. As if there, the screams could become much bigger than the small human bodies producing them.

B. H. And standing there in the field in Donaustadt, it was as if our anticipation of a scream was enough to create an alertness of the entire body (be it the producing or the witnessing one), opening up all perceptual pores.

S. V. On Saturday the audience spontaneously started to join our screamscape. There was something absolutely unbelievable about these two hundred people who started screaming too, following our group of screamers across the gigantic field in waves of resonating bodies. The day after, it was raining and only 8 degrees celcius. We screamed in the mud while the audience chose to keep their feet dry on the path. The voices sounded more distinct, more raw, somehow closer to the elements. That day, it was one lonely walker who followed the screamers disappearing into the distance—as if by following their tracks he might find his own place to scream from. 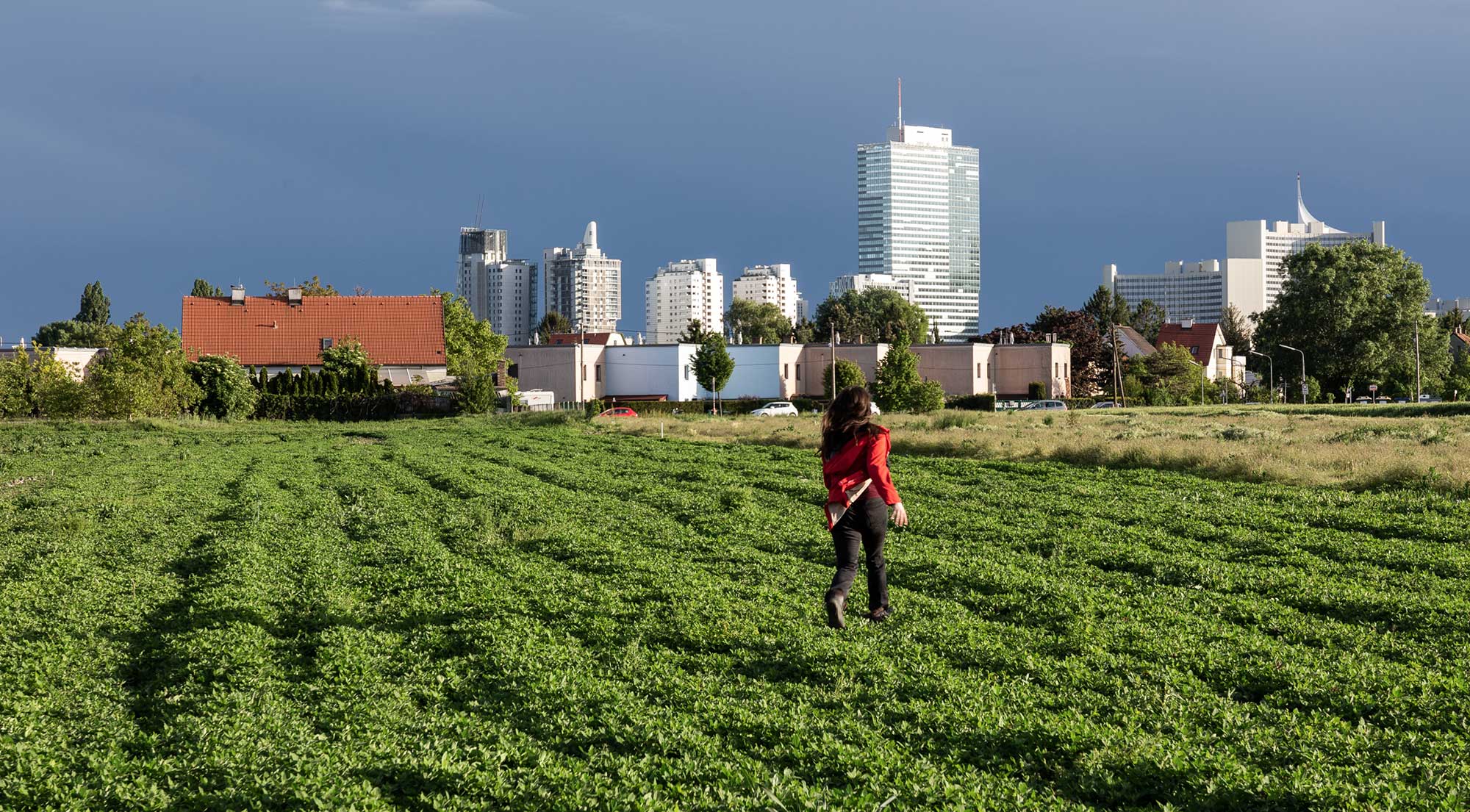 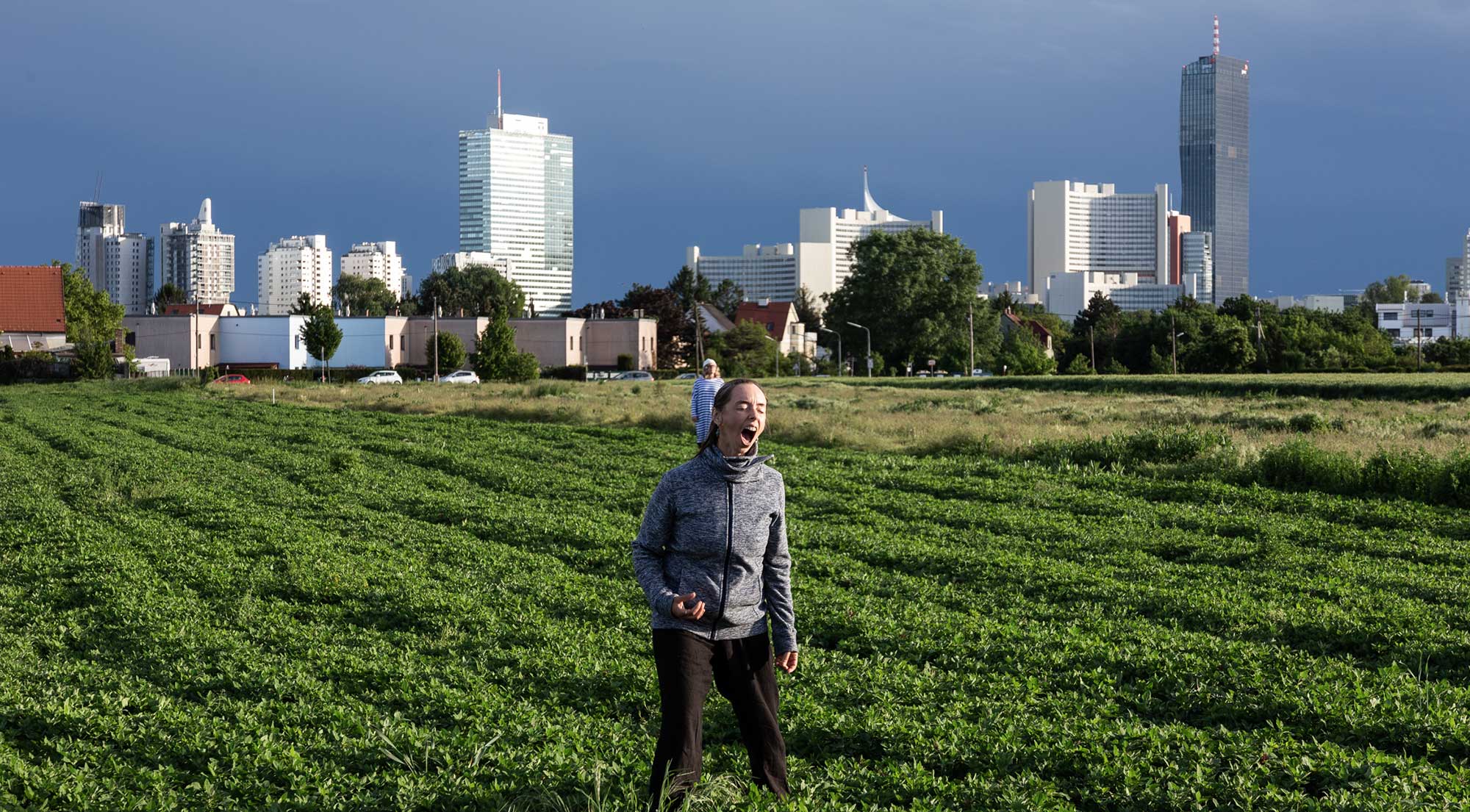 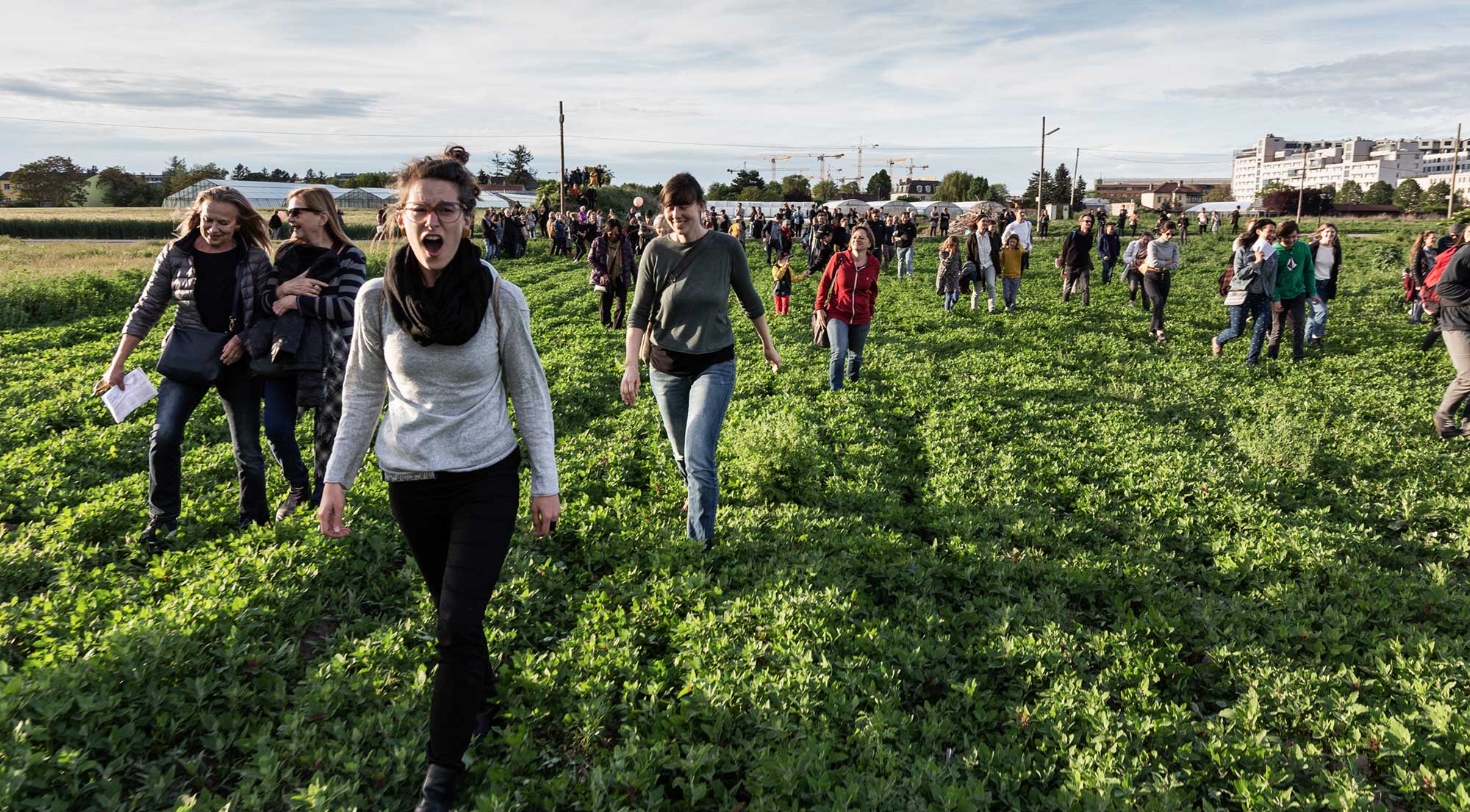