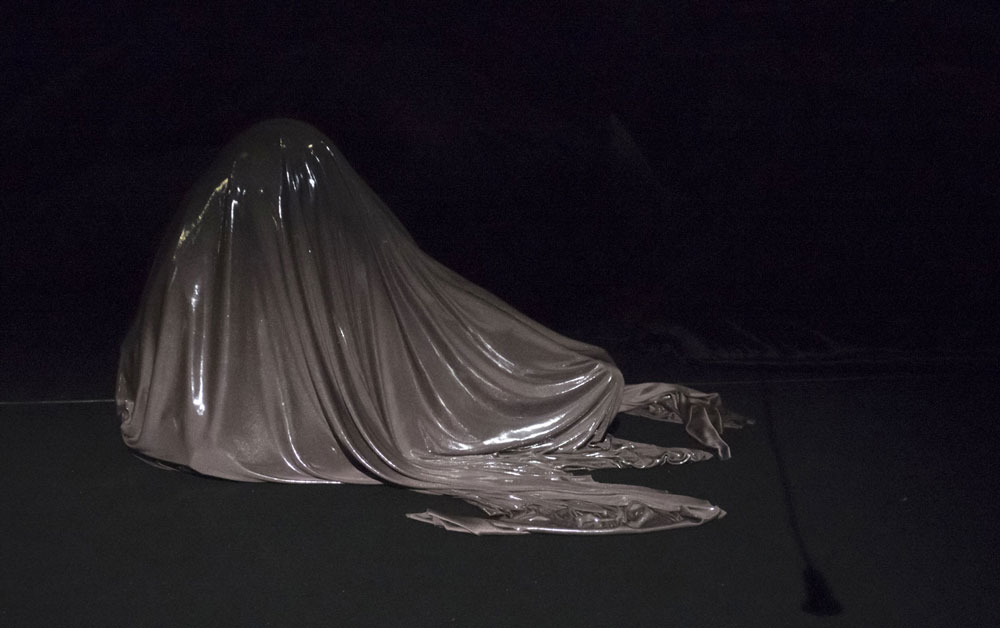 “The unknown”, said Faxe's soft voice in the forest, “the unforetold, the unproven, that is what life is based on. Ignorance is the ground of thought. Unproof is the ground of action...The only thing that makes life possible is permanent, intolerable uncertainty: not knowing what comes next.”
Ursula Le Guinn, The Left Hand of Darkness

Unforetold is a performance made with seven small beings, sensitive to what has not been foretold, connected still with the magical. They are experts in asking questions and thus evoking other realities. They can receive answers in unknown languages, they can hide in plain sight. They can transform into everything and every thing transforms them. New worlds beyond words are being created and transformed, to then dissolve again. Time is elusive in their presence. They travel between ancient pasts and far futures, between the deep sea and the heights of the stars. Darkness protects these beings, in a glimmering, shimmering, resonating universe where they hide and are hidden.

“We are in that world, and that world is in us,” they say. “It's night time, but we are not sleeping. We grow older but ever stay small. We only die when we can’t count any more. We move like animals. And when we move like an animal, we become that animal. And one day, your little light goes out and you start forgetting everything.”

Maybe, they know more and in other ways than us. Maybe we are one of their fictions.

Unforetold was made in close collaboration with seven small beings between 8 and 11 years old. 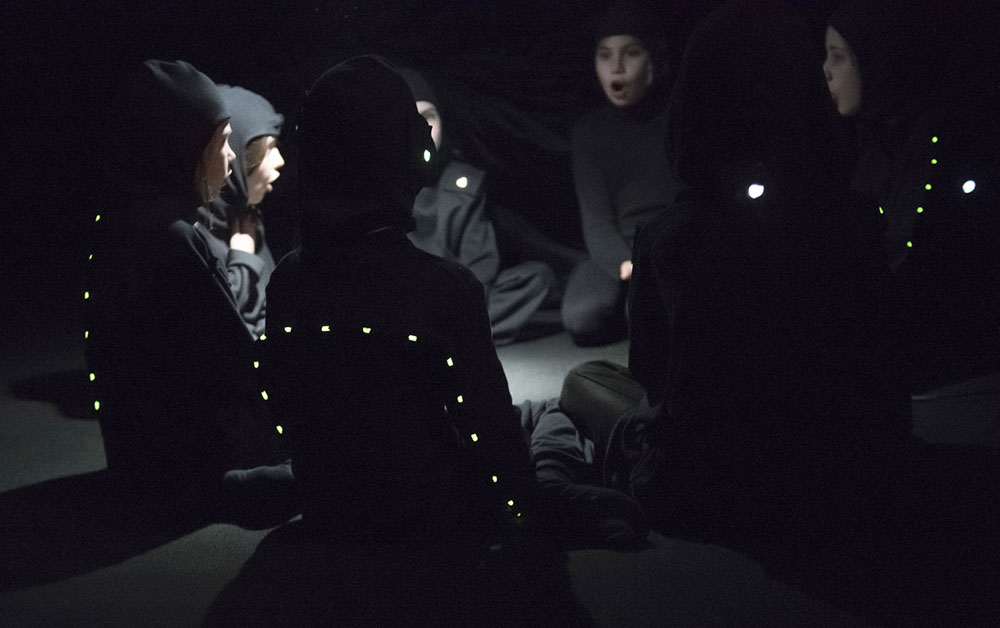 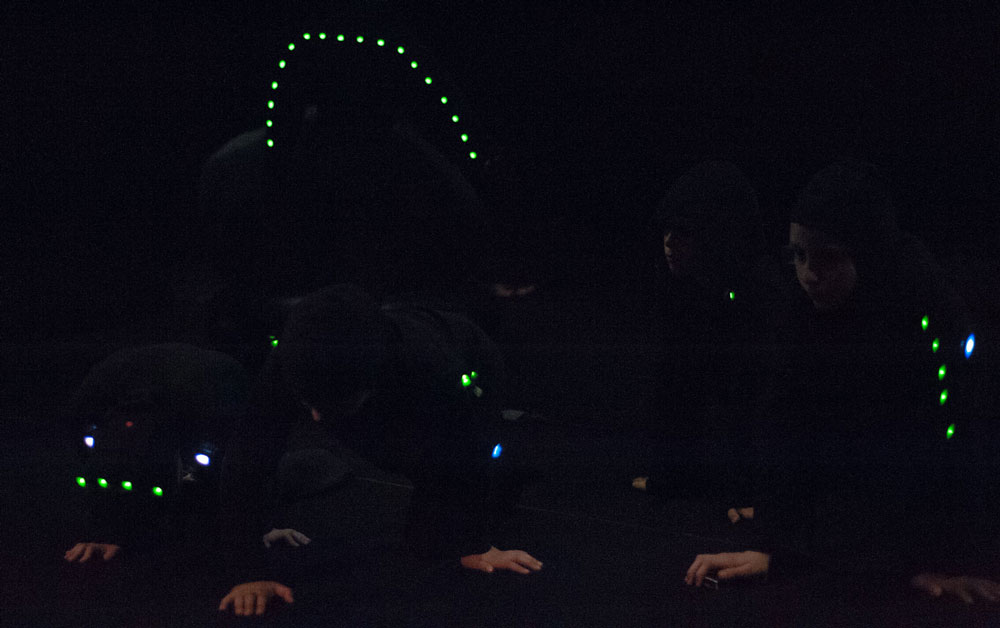 Unforetold is a piece (or maybe rather a place) that has been intuited more than directed. It started from my fascination with the great capacity of young children to relentlessly ask questions, regardless of whether they find answers. I like to think of asking questions as a magical act that evokes new possibilities, logics, worlds. All imagination can start with a 'what if' question. Thus asking questions becomes an act of evoking things and worlds which then, by coming into being, evoke questions again.

What if a bat would be asking questions when she sends out her high-pitched frequencies and waits for the surrounding objects and surfaces to answer by resonating? The bat then doesn't look for answers, she receives them.

I never addressed the children as 'children' (versus adults). I prefer to think of them as small beings – or small beginnings – with specific magical qualities, a deep intuitive intelligence and a great capability to learn. An attitude that allows the unforeseen, the unforetold to happen.

In this piece/place we evoked together, communality rather than individuality matters. The different aspects of the place are inhabited by a collective consciousness, a 'hive mind', connecting all elements, including the small beings, in a dimension much broader than human.

When I like the theatre space, it's when it opens rather than closes: it opens through its being enclosed. Today's world pre-dominantly thrives on statements, statistics and states rather than on questions, inquiries and queering. In today's world it can feel very comforting to be able to enter such an enclosed, opening place.

The black box as a space of questions then acts as a 'heterotopia'. "These counterspaces (...) are well recognised by children. Certainly, it's the bottom of the garden; it's the Indian tent erected in the middle of the attic; or still, it's on their parents' bed where they discover the ocean, as they can swim between the covers, and the bed is also the sky, or they can bounce on the springs; it's the forest as they can hide there; or still, it's the night as they can become ghosts between the sheets and, finally, it's the fear and delight of their parents coming home... The children's inventive play produces a different space that at the same time mirrors what is around them. The space reflects and contests simultaneously." (...) "Thus it is that the theatre brings onto the rectangle of the stage, one after the other, a whole series of places that are foreign to one another."

I imagined this heterotopic space of questions as a dark space, for in darkness everything is still possible. The black box of the theatre as a space for radical imagination, a dark place full of potential.

'Dark times', 'dark reality', 'dark feelings', ... Why is darkness predominantly considered as something negative? What about its genealogy? It became my suspicion that this denigration of darkness, versus the connotation of light with 'seeing', 'clarity' and 'rationality' is culturally and ideologically informed, following Enlightment thinking. There is something obsessive in the way Western society has given rise to a culture of 24/7 light.

Light makes it possible to see but is also violently exposing; darkness makes it possible to rest, to hide and to be hidden. In current times where privacy hardly remains, where street lanterns become surveillance tools, where the light of screens captures us incessantly, darkness has become increasingly precious.

Certain realities are possible only because they don't catch light, they are not being seen. A shelter, a womb, a dark room, a mole's network, a hole, a cave, ... In those positive, enveloping dark spaces, we recourse to feeling, listening, imagining.

"How to shed darkness instead of shedding light?", Hendrik asked.

The forgotten goddess of darkness is Nyx, the goddess of the night, one of the primordial gods who emerged at the dawn of creation. In Flemish Nyx sounds like 'niks', which means 'nothing'. The goddess of nothing, at the beginning of all creation. She was depicted as a beautiful woman, dressed in black, surrounded by mist, and often in the company of some of her numerous children. Nyx lives in a cave beyond the ocean, in which she gives oracles.

The eternal darkness where Nyx lives is punctured only by the light of all kind of amazing bioluminescent beings. The reason why so many deep sea creatures emit light, is not to be able to see, but for reasons of attraction, defense, camouflage, warning communication, etc.

Deep down in the ocean we don't only encounter beings but also objects that disappeared a long time ago, such as the wreck of the Titanic.

In 1912 the ship that was deemed unsinkable, a symbol of wealth and progress, sank to the darkest depth of the ocean after having hit an iceberg. The orchestra continued to play at the nose of the ship as it was sinking. Composer Gavin Bryars made a music piece based on the imagination that the orchestra continued to play even when they were under water already, till the bottom of the ocean. The prolongation of the music into eternity comes about from a 'scientific' point of view: "Towards the end of his life, Marconi (the inventor of wireless telegraphy) became convinced that sounds once generated never die, they simply become fainter and fainter until we can no longer perceive them."

The small beings of Unforetold are excellent listeners who don't need special equipment to hear the sounds from past or future or parallel worlds.

In this world, they speak their own language, they call it 'Lutie Chaakaa'.

Everything in this piece/place is made in collaboration with the small beings. It comes from them, through listening, playing, imagining and being. Behind the piece there is a secret only they know and share.

Luka asked me whether there would be a story in the piece, a story people can understand. I hesitated and then said: "Probably, when people will listen and look at this piece, they will see many different stories." She got silent and pensive. Then – to my relief – she said: "That's great."

Monica said: "What if we make one mistake in our piece? Would that be a catastrophe?" Timon said: "No, then you would just have to process that."

Luka said: "This landscape makes me feel as if a lot of big soft blankets would fall on top of me."